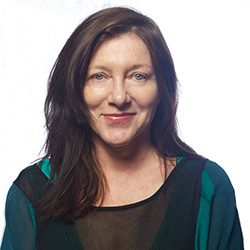 Mme Lyons taught in various schools in Naples, Dublin, and Paris. She received theatre training in France and Ireland.

Mme Lyons learned French in Ontario, but perfected her French by spending a decade in France and Ireland.

The role of the French teacher is to become superfluous, not in the sense of a robot replacing a mind, but in that of a mind replacing a mind; it is not to tell students what to think, but to develop in them the skill to think for themselves.